My wife and I went to the grocery store last weekend on our usual shopping day. Usually I’m not going through any deep philosophical thoughts in the store. We go through our list, grab our food and go home. For some odd reason I started looking at the signs and noticed several fruits that were seedless. Now there’s nothing odd about seeing seedless produce but what did strike me was the fact that I didn’t see a counterpart with seeds.

Certainly seeing seedless grapes and watermelon is commonplace, but the issue is that it’s common. What’s even worst is the difficulty in finding watermelon and grapes with seeds. Just to be real, marijuana without seeds are GMO. I’m not going deep into the GMO’s because that’s worthy of several posts.

However it is worth mentioning that GMO’s, terminator seeds, Monsanto, and etc. have totally changed the food game. Let’s get one thing understood. That GMO fruit or vegetable is a better alternative than your potato chip or honey bun any day of the week. Those are facts.

I was reading an article that suggested that the average fruit and vegetable today only has 35% of the nutritional content of the produce fifty years ago. Much of this is due to the genetic splicing taking place that’s helping to add to these Frankenfoods.

In the GMO world there is a term called “terminator technology”. The goal of this technology is to modify plants to produce sterile seeds known as “suicide seeds”. This causes second generation seeds to always be sterile. Therefore, small farmers can never re-use seeds because now the seeds have no life. They are forced to constantly use the GMO seed every season instead of using natural seed that reproduces itself. Lets view this from some different angles.

In my opinion the food lacks nutritional content because its indeed the product of suicide seeds. Looking at the Book of Numbers Chapter 1, it was established that the nationality, identity, and race of a person was determined by the father. Therefore, you are the seed of your father. Well how can the food be full of life when its father produces seeds of death. A suicide seed is not going to produce life. There is no way you can have life when its the product of death itself.

Lets say a couple is having a difficult time having a baby. It’s determined that the father has sterile seeds (sperm). That is a horrible thing. His seed has no life or value. It’s through the seed that life is given. Its through the seed that the quality of something is given. The seed is the life force. The type of seed planted is the determining factor of the harvest that we reap. If terminator and suicide seeds are being planted then expect a lifeless product that lacks content. 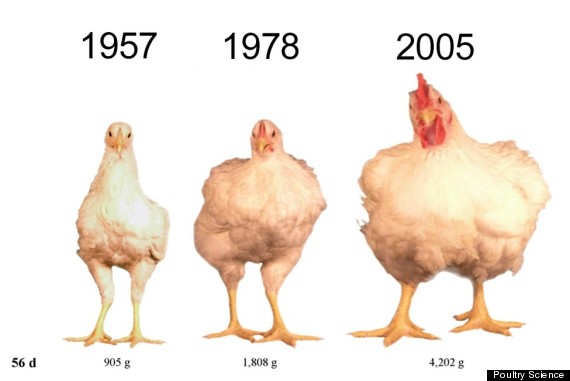 Here is another example of Frankenfoods. Look at the difference of size between these chickens. There is a dramatic increase of size in these birds. Also, these bird are getting much larger quicker. These birds are being pumped with hormones to expedite their growth to keep up with the demands of mass production. They are conveyor belt animals for the most part. Bring them in, blow them up, slaughter them, and get them out of the door.

I saw a video a few months ago of a family that bought a chicken from Sam’s Club. This chicken was ripped! It looked like it had been in prison for 10 years doing pushups and bench press. Now we know that’s not normal. Your chicken should not look like The Hulk.

Coming up soon I will be doing some in-depth post on the history of GMO’s and the purpose. People need to know just how diabolical these corporations are.